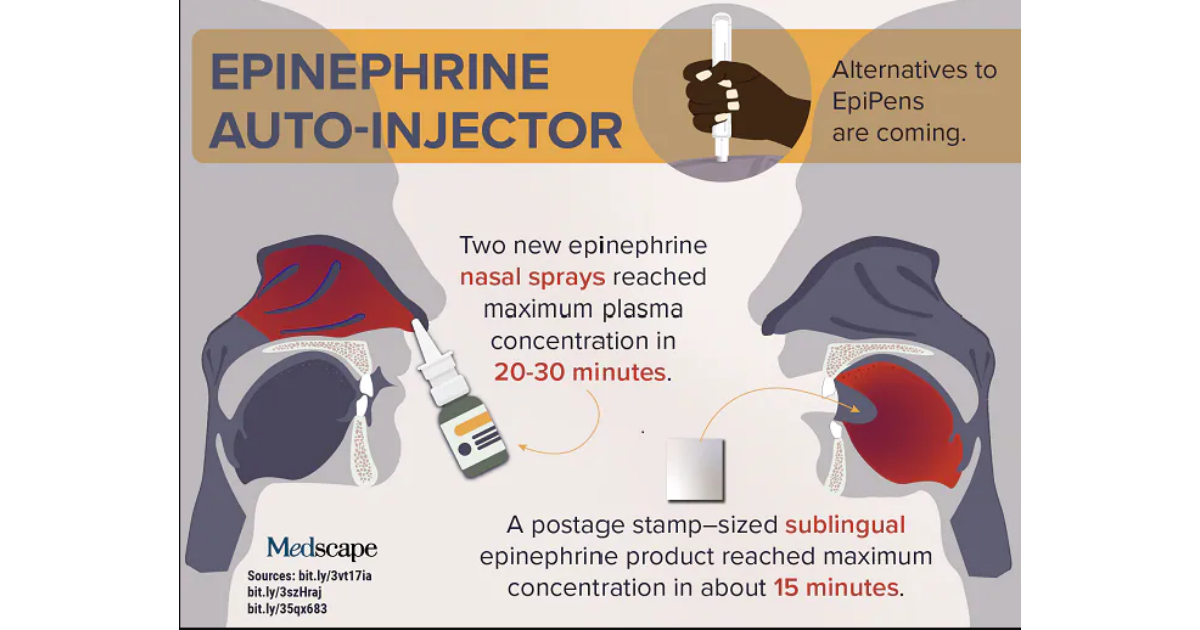 Recent fluctuations in the cost of EpiPens — epinephrine auto-injectors that are used as emergency treatment of anaphylaxis and other indications — have led to lawsuits and pricy settlements. Combine that with longstanding anxiety surrounding the injection method, and it’s no wonder that news about effective alternatives in development was met with much enthusiasm. Findings on new epinephrine products that were presented at the American Academy of Allergy, Asthma & Immunology 2022 Annual Meeting resulted in this week’s top trending clinical topic (see Infographic).

The two intranasal formulations that are under development are Neffy 1 mg (ARS Pharmaceuticals) and BRYN-NDS1C 6.6 mg (Bryn Pharma). Aquestive Therapeutics is working on a sublingual film (AQST-109) that delivers epinephrine and begins dissolving when placed under the tongue. Neffy was compared with manual intramuscular injection (0.3 mg) and two auto-injectors (EpiPen 0.3 mg and Symjepi 0.3 mg) by analyzing data from multiple randomized crossover phase 1 studies examining pharmacokinetics and pharmacodynamics in 175 healthy adults. EpiPen was fastest (20 minutes) at reaching maximal plasma concentration (Tmax), followed by Symjepi and Neffy (both 30 minutes) and epinephrine 0.3 mg intramuscular (45 minutes). Untrained participants were able to administer the Neffy spray to themselves or another participant safely and effectively during a simulated emergency. Bryn Pharma compared self-administration and administration by trained professionals. They found comparable profiles for each. Tmax values were also similar: 21.63 minutes (trained professional) and 19.82 minutes (self-administered).

The sublingual product from ARS Pharmaceuticals does not require water or swallowing and its packaging is thinner and smaller than a credit card. Analyses showed that the epinephrine reaches Tmax in about 15 minutes, with a range narrower than that of the EpiPen. “Having a non-needle delivery device would help many people overcome that fear and hopefully increase use in anaphylaxis,” said David Stukus, MD, an allergist-immunologist and professor of clinical pediatrics at Nationwide Children’s Hospital, Columbus, Ohio who was not involved with any of the studies mentioned.

Details of these alternatives come as the company that markets the EpiPen settled a lawsuit. Viatris Inc, formerly known as Mylan, agreed to pay $264 million to resolve a class action lawsuit alleging that it had engaged in a scheme to delay generic competition to its EpiPen treatment. The settlement would resolve legal action that began after a public outcry in 2016 over Mylan’s decision to raise the price for a pair of EpiPens from $100 to $600 in 2008. In 2017, Mylan agreed to pay $465 million to resolve US Department of Justice claims that the company overcharged the government for the EpiPen. Pfizer, which manufactures the EpiPen, agreed to pay $345 million last year to resolve claims by consumers who say they overpaid because of anticompetitive practices.

Patients and clinicians have long lamented the “price-gouging” and other limitations of injectable epinephrine. Although the drug is essential for stopping life-threatening allergic reactions, many patients often don’t even carry their auto-injectors or hesitate to use them. Anticipation that new products may drive down prices and lead to better patient adherence resulted in this week’s top trending clinical topic.

Learn more about EpiPen indications and other concerns.

About the Author: AFSA